One of the most remote islands of the Adriatic Sea is Vis Island. Islanders say Vis is rich in time, it is the island where the time stops. The town of Vis is located in a relatively large and protected bay (Saint Juraj Bay – Uvala Svetog Jurja) on the north-east side of the island facing the island of Hvar and the Dalmatian mainland. The port of Vis is located in the south-west part of the bay, protected from open sea influence by the islet of Host and the peninsula called Prirovo. Other smaller ports in the bay are located in Kut and Stonca.

Hills (about 250-300 m high) separate the town of Vis from its fertile fields (Dračevo polje and Velo polje) in the interior of the island, which are important for the local economic development (viticulture). The area of the town of Vis also comprises the indented south and south-east coast with many picturesque bays (Milna, Rukavac, Srebrna, Stiniva, Stončica, Ruda, etc.) and smaller islands Budihovac and Ravnik with great touristic potential.

In the evening, many sailing and motor boats slowly arrive to Vis finding their safe port in St. Juraj bay. Many sailors enjoy in their walk down the seafront promenade and dining in wonderful Vis restaurants which compete in making exquisite local dishes. No matter which restaurant you choose here, you will make the right choice.

Vis Island is famous for its underground tunnels and bunkers and some of them were transformed into real attraction! It is also famous for its beautiful beaches and bays. Be sure to visit the beautiful Stončica bay and find refreshment on several beaches in town of Vis.

Do not miss to visit Komiža, a beautiful fishing village on the west side of the island, whose beauty and spirit are simply enchanting. There you will also find many beautiful beaches and a special bonus for dog owners is a dog beach Vartalac.

In particular we recommend a trip to Biševo and its famous Blue Cave, which will delight you with its dancing lights. The untouched nature of Biševo will make your sail around the whole island worthwhile and memorable. 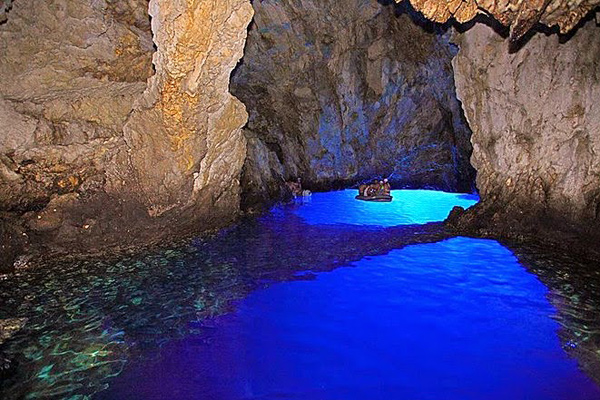 Hvar, an ancient city with rich history. With its architecture, beautiful nature and mild climate many would describe it as a true fairy-tale city. In addition to natural beauties, the town of Hvar becomes an ideal destination for couples’, families’ and parties’ holidays because of its high-quality accommodation and Mediterranean cordiality and courtesy.

The town of Hvar is a unique blend of luxuriant Mediterranean nature, rich and multi-faceted cultural and historical heritage and fashionable tourist present.

Situated in a picturesque natural setting, facing the southern, sunny side of the world, which has endowed it with all the Mediterranean lure and exuberance, facing the sea which has favoured it with an illustrious and unrepeatable history, Hvar is an inexhaustible treasure-chest of sights, experiences and adventures.

The name is derived from the Greek – PHAROS, the name given to both the island and the town situated at site of today’s Stari Grad (which was the island’s capital until the 13th century, when that function was taken over by Hvar).

In the Middle Ages, Hvar achieved renown and power as an important port and part of the Venetian marine empire. Today, it is the tourist centre of the islands and one of the best-loved tourist resorts on the Dalmatian Riviera – a town of laughing, kind people who are almost all engaged in some tourism-related activity. 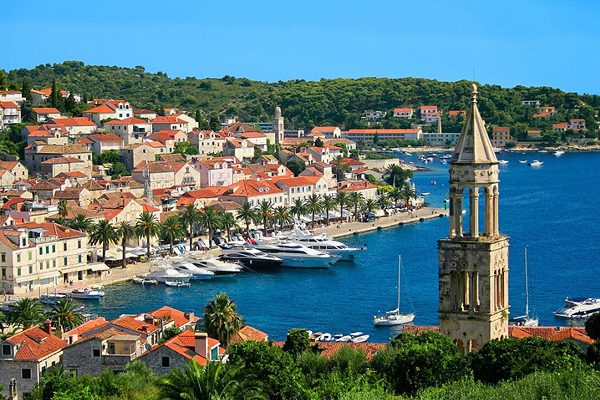 Milna is situated on the western part of the island of Brač, in a deep bay overlooking the strait Split Gates (Splitska vrata). A small island of Mrduja is situated in the Split Gate, in front of the Milna Bay, around which the Mrdujska regatta takes place. Milna is one of the most harmonious ‘small villages’ of Baroque urbanism on the Dalmatian coast and the best natural harbour on the island of Brač, in which the Emperor’s ships found a safe harbour during the construction of Diocletian’s Palace in Split.

The bay in which Milna is settled separates in two sleeves, Žalo and Pantera. Today, this area is occupied with marina with large number of berths, modern equipment for safe staying and service for yachtsmen from all over the world. Crystal clear see, healthy home-made food, ideal conditions for diving, sailing, fishing, and frequent and fast connections to the mainland are only some of the reasons for visiting this beautiful Mediterranean place. Wonders of nearby harbour Bobovišća, villages Ložišća and Podhume, surrounding beaches and bays hidden in pine shadows are additional guarantee of the vacation you will remember for a long time, far away from loudness and stress of every-day life. 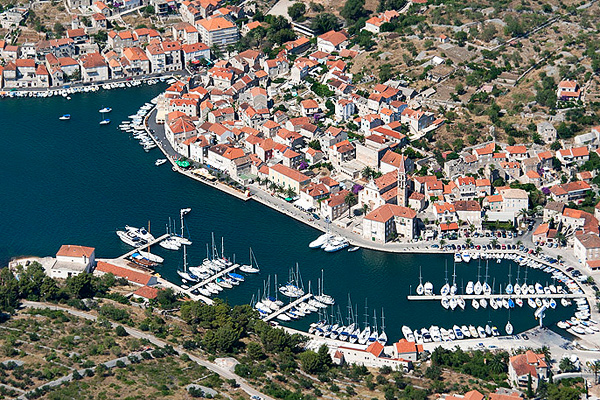 Today Split is the liveliest “old-timer” city with a rich cultural and historical heritage. This is the unique city of distinctive Southern and Mediterranean soul. It is a town whose inhabitants do not live fast but moderate, somewhat slow pace so should you happen to be in Split’s streets, restaurants and cafeteria full of people, every day will make you feel like its holiday!

Diocletian’s Palace
In 1979, the historic core of Split with Diocletian’s Palace was listed in the UNESCO’s register of World Culture Heritage. At the same time, it was the Emperor’s residence and the Roman fort. The palace had “sisterly” palaces, that is, similar villas-summerhouses of about the same age (Diocletian’s was completed around year 305 A.D.), which existed in Sicily and in Serbia (Gamzigrad). The assumption was that they belonged to Maximilianus and Galerius (Diocletian’s co-rulers at the time of Imperial Terrorism), but were not preserved like the one in Split. The palace significantly contributed to the spatial development of the city as Split gradually spread around its walls. Today’s main value of Diocletian’s palace lies in its high degree of preservation. It is the best preserved set of late-Roman palace architecture in its entirety and its parts. It is one of the most important structures of late antique architecture, not only for preservation but also for a series of original architectural forms. In the 16th century 4 gates were given their famous names: northern – Porta Aurea, eastern – Porta Argentea, western – Porta Ferrea, southern – Porta Aenea. Thus: the gold, silver, iron and brass gates.

Peristyle
Peristyle has always been the heart of the Palace and the city since it’s by far most important and historically rather old imperial square. Some of its elements were demolished, some altered, some holes were made; things were patched and built as such strained circumstances allowed. But, in spite of the time and centuries that have past, it is still unique antique place where you can stumble upon an unusual coexistence of sphinxes, sarcophagi, early Christian crosses, medieval tombs, Roman temples…etc.

Cathedral
The Split cathedral itself is the oldest building housing a Catholic cathedral in the world, as one part of it emerged from the Mausoleum built by the Emperor Diocletian. Today his last resting place is one of the smallest cathedrals in the world, and It is consecrated to the St.  Domnius (Sv. Duje) – the first Salona bishop who later became the patron saint of the City of Split. Diocletian had killed him, together with other Salonitan martyrs, to prevent the spreading of Christianity throughout his empire during the last Roman persecution of the Christians in 304 A.D. Isn’t this an irony?

Basement Halls
Basement halls of the Diocletian’s palace were just the substructure or the support of the rooms where the Emperor lived. Today, basement halls play a significant role in the everyday life of the city. Concerning the history of architecture, basement halls are important segment due to the fact that they are similar to basilicas. Existence of such a building in the late Roman imperial architecture before the Christianity is an enigma yet to be solved. During the excavations of the western basements during the restoration, architectural elements of a building older than the Palace were found, as well as marble triclinium, which must have been part of the Emperor’s dining room.

Gregory of Nin (Grgur Ninski)
At the main entrance to the Palace, in front of the Golden Gate, there is a bronze statue of Gregory of Nin, created by Ivan Meštrović and originally set up in 1929 on Peristyle, from where it was moved during World War II. Gregory, as 10th-century bishop, particularly become prominent at the church councils where he promoted the right to liturgical celebration in the national language, since Latin was the language of the service at that time. Croats are the first nation in Europe that arranged with the Pope to have church services in their native language. Gregory of Nin made the greatest contribution to this.